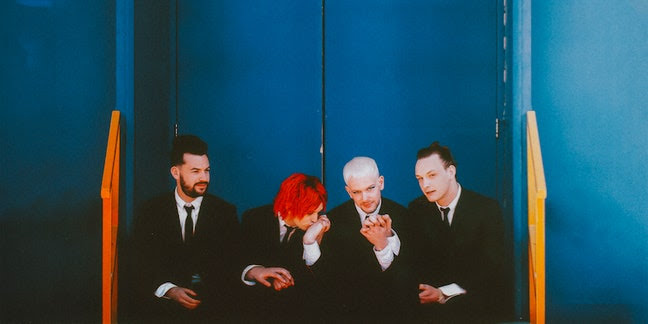 After a couple years of touring, The 1975 have re-emerged with the brash, hooky, guitar-soaked “Give Yourself A Try.”

Upon first listen, the stand out differences on this track compared to their previous work can be easily distinguished by two things: the aforementioned brash guitar sound and the surprisingly soft, careful tone of Matthew Healy’s vocals. After hearing the track a couple more times, tearing apart the initial sound and tone, a noticeable difference can be found within the lyrics as well. In the past, Healy’s lyrics have been dower at best. For example, in “The Sound” he tackles the loss of a relationship in hopes of protecting his mental health, and in “Me” he faces self-criticism and suicidal thoughts.

For “Give Yourself A Try” there’s a new, almost lightheartedness to the lyrical content; there’s a sense of unexpected optimism. Though there’s still a somber story within the lyrics, Healy sings with newfound hopefulness. Rather than speaking to the audience, the lyrics sound more like a self-addressed letter of intervention.

Though Healy’s critical of himself and the world around him, he has a more confident, vulnerable lilt in his voice, and it caresses the chorus, pleading for newfound hope, in an effort for you alongside him, to “give yourself a try.”